Sonja Scheuring published an article on „Does Fixed-Term Employment Have Spillover Effects on the Well-Being of Partners? A Panel Data Analysis for East and West Germany“ in the SSCI-listed Journal of Happiness Studies. The article is the result of a first cooperation beyond the SECCOPA project and was co-authored by Jonas Voßemer (formerly in the HEALFAM project, now at the Mannheim Centre for European Social Research, MZES), Anna Baranowska-Rataj (PI of the HEALFAM project) and Giulia Tattarini (Berlin Social Science Center, WZB). 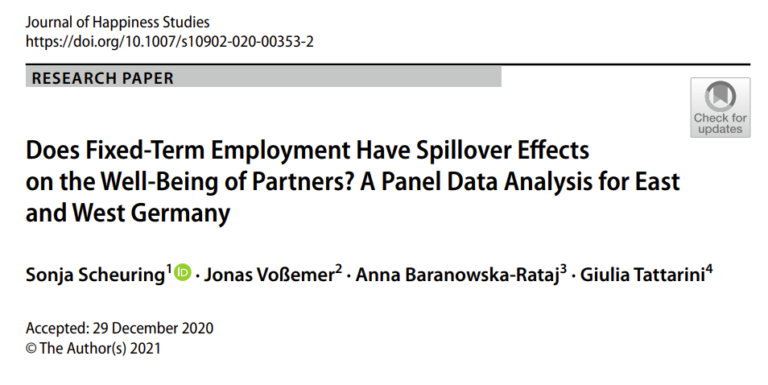 This paper answers three research questions: What is the impact of fixed-term employment on the well-being of partners? How do these spillover effects differ by gender, and do gender differences depend on socialization in East or West Germany? Do individual well-being, perceived job insecurity, and financial worries mediate the spillover effects? We use longitudinal data from the Socio-Economic Panel (SOEP), 1995–2017, and a sample of heterosexual couples living together, to estimate fixed-effects panel regression models. In contrast to previous studies, we consider asymmetric effects of entering and leaving fixed-term contracts by focusing on transitions from unemployment into fixed-term and fixed-term into permanent jobs. Confirming previous research on spillover effects of unemployment, we find that fixed-term re-employment increases partners’ well-being and that these effects are larger in case of re-employment by men and partners’ socialization in West Germany. We also show that transitions from fixed-term to permanent jobs do not substantially increase the well-being of partners with little differences by gender and place of socialization. While the spillover effect of re-employment is mediated by changes in the well-being of the individual re-entering the labor market, changes in job insecurity and financial worries due to transitions from fixed-term to permanent jobs are too small to produce meaningful effects on well-being. Although fixed-term contracts have been referred to as a new source of inequality, our results show that they cause little difference in the well-being of individuals and their partners and that finding a job matters more than the type of contract.