Our PhD students Sophia Fauser and Sonja Scheuring published a new SECCOPA paper on the consequences of couples‘ employment trajectories and cumulative disadvantages on the later life housing outcomes in the SSCI listed journal Advances in Life Course Research. 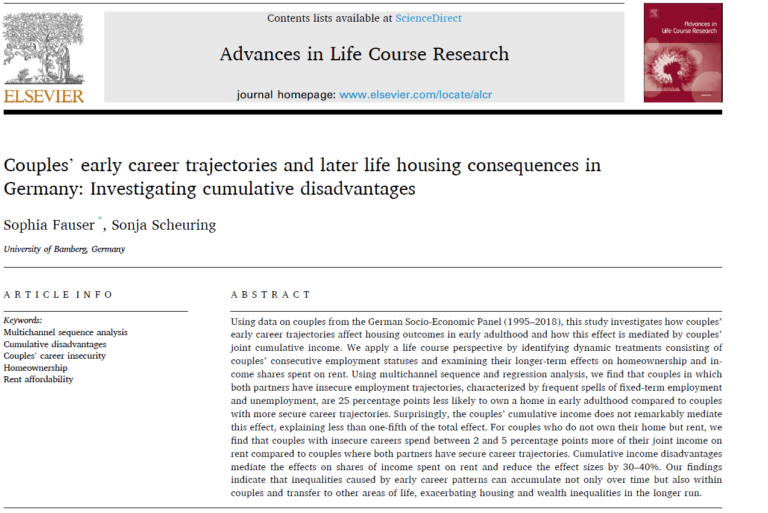 Using data on couples from the German Socio-Economic Panel (1995–2018), this study investigates how couples’ early career trajectories affect housing outcomes in early adulthood and how this effect is mediated by couples’ joint cumulative income. We apply a life course perspective by identifying dynamic treatments consisting of couples’ consecutive employment statuses and examining their longer-term effects on homeownership and income shares spent on rent. Using multichannel sequence and regression analysis, we find that couples in which both partners have insecure employment trajectories, characterized by frequent spells of fixed-term employment and unemployment, are 25 percentage points less likely to own a home in early adulthood compared to couples with more secure career trajectories. Surprisingly, the couples’ cumulative income does not remarkably mediate this effect, explaining less than one-fifth of the total effect. For couples who do not own their home but rent, we find that couples with insecure careers spend between 2 and 5 percentage points more of their joint income on rent compared to couples where both partners have secure career trajectories. Cumulative income disadvantages mediate the effects on shares of income spent on rent and reduce the effect sizes by 30–40%. Our findings indicate that inequalities caused by early career patterns can accumulate not only over time but also within couples and transfer to other areas of life, exacerbating housing and wealth inequalities in the longer run.